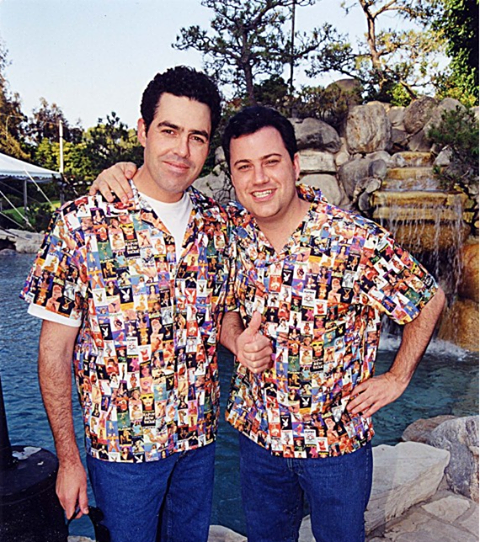 From comedians like David Letterman and Jimmy Kimmel to political pundits like Keith Olbermann and Rush Limbaugh many well-known names have enjoyed success in widely dissimilar entertainment jobs while owing at least part of their current success to their former jobs in sports and sports radio.

Jimmy Kimmel started in radio while still in high school and struggled to find his place until he became “Jimmy the Sports Guy” for the Kevin and Bean morning radio show. It was during his five years as the sports guy that he befriended Adam Carolla. That friendship launched the Comedy Central hit “The Man Show” but Jimmy went even further, now hosting a popular late-night show.

Adam Carolla often times considered Kimmel’s sidekick, struggled to find a spot in radio until inventing a job as a boxing coach for “Jimmy the Sports Guy,” leveraging this ‘foot in the door’ to get a regularly featured spot on the Kevin and Bean show. Perhaps best known as the host of “Loveline” or co-host of “The Man Show,” Corolla is now the king of new medium hosting the most downloaded podcast in the world.

A late night superstar, David Letterman was a hero to a young Jimmy Kimmel. Letterman began his career as a talk show host on AM radio in Indianapolis and as a TV weatherman. His first foray into sports broadcasting was for ABC Sports’ coverage of the 1971 Indianapolis 500. Auto racing has remained a part of Letterman’s life throughout his career as his partnership in racing team “Rahal Letterman Lanigan Racing” demonstrates.

While not specifically a ‘sports guy’, Rush Limbaugh worked many radio jobs as a disk jockey who focused much of his time to sports. For a short time, he even left radio for a job with the Kansas City Royals as director of promotions but he found his way back eventually making his name as a conservative political pundit and one of the most listened to radio personalities in history.

Known as a more liberal news journalist, Keith Olbermann began his career with United Press International but quickly moved into radio and television working as a sportscaster and sports anchor for local stations in New York and Los Angeles. Olbermann gained national fame after joining the blossoming ESPN network in 1992. After nearly twenty years in sports Olbermann returned to the news with his own show, “Countdown with Keith Olbermann.”

Now the popular anchor for Good Morning America, Robin Robers made her mark working with ESPN where she anchored Sports Center for more than fifteen years working alongside Olbermann for many of them. Before starting her career at ESPN, she worked as a radio host and a television sports anchor for several local stations.

Mitch Albom is perhaps best known for his bestselling book “Tuesdays With Morrie” but owes much of his success to his jobs in sports radio. Albom’s first radio job was as a sports commentator for a Detroit radio station’s morning program in 1987 but it didn’t take long before he had his own Sunday night sports talk show, then a daily talk show, and eventually working seemingly everywhere in radio, television, and print journalism. He has also had great success as a novelist, screenwriter, and playwright. Albom is a true renaissance man.

Another renaissance man has seemingly done it all, Bob Costas broadcasting every major American sport and the Olympics. Spending the bulk of his career with NBC Costas got his start as an announcer for the Syracuse Blazer’s, a minor league hockey team before landing a radio job in St. Louis serving as the play-by-play man for the “Spirits of St. Louis” ABA basketball team.

Jobs in sports radio call for talent of all kinds. Your strengths can vary widely, in these cases all the way from comedy to politics with sports as the common theme. Even landing that first internship can lead to greatness but where do you start? Start at JobsInSports.com, the original sports job board with over 7,200 active sports employers, many of whom would love to find the next Bob Costas. Even if you already got your start but are ready for the next step, contact us and we will help you get there.