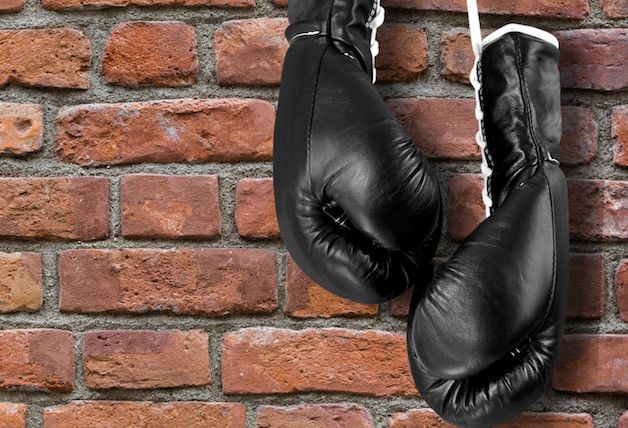 The last great American prizefighter bites with his words and fights with his hands. Whether Floyd Mayweather takes to Twitter, picks up a mic for some pre-fight hype or grants an interview from his private jet, confidence underlines his words and arrogance punctuates his predictions. His ability to verbally challenge opponents is only matched by his fisticuffs in the ring.

At 45-0, Mayweather’s boxing record is unblemished leading many to say—as the next wave of fighters explore mixed martial arts—he is the last of his kind. A member of a dying breed that, with brawn and brains, built an empire for himself and made those closest to him wealthy beyond belief.

The highest compensated athlete of 2013—$90 million in earnings—amazingly won the crown with zero endorsement deals. He wisely kept the bulk of his in-ring earnings by acting as his own promoter, fighting with Mayweather Promotions. But like most great athletes, Floyd Mayweather doesn’t go it alone. While The Money Team, his well-publicized entourage, gets all the attention, it’s a man named Leonard Ellerbe that helps refill the coffers despite the boxer’s crazy spending habits and obscene lifestyle.

Leonard Ellerbe is Floyd Mayweather’s do-it-all sidekick—confidant, business manager, personal assistant, a conditioning coach, and promotions company head honcho. Ellerbe, CEO of Mayweather Promotions, is the yin to Mayweather’s yang. The boxer has final say in all business dealings but he sits on a pedestal that alters his view of reality requiring someone closer to the ground to lead the way. Mayweather makes decisions while surrounded by a crew known more for its ability to nod-and-smile than its pointed discussion and debate. But Ellerbe, being part of the true inner circle, can challenge him and make decisions that are good for the champion and his company. The former amateur boxer is ambitious, working in many capacities for the undefeated fighter in their time together. A person that goes from conditioning coach and personal assistant to the leader of a major boxing promotions company doesn’t do it by happenstance. Confident, pragmatic, calculated and single-minded are fair descriptors for Leonard Ellerbe. His livelihood depends upon the success of the era’s most successful boxer and he knows it. You’ll find few quotes from Ellerbe talking about himself. And if you search for him on Wikipedia you’ll only find his name smattered throughout Money Mayweather’s page. When he talks he speaks of his boss. “I’m not the type of guy to raise my hand and say ‘Look what I’ve done!’… I try to play behind the scenes as much as possible and just continue to take Floyd’s career to the next level.” The CEO has a vision for Mayweather Promotions. He sees the success of Golden Boy Promotions, founded by former champion Oscar de la Hoya, and believes his business can soon reach that level. With his servant-leader mentality and savvy business sense—along with the leverage of the Floyd Mayweather name—Ellerbe has the tools needed to achieve such a goal. He has the tools but he doesn’t have the power. Not all of it anyway.

The Chief Executive Officer of most companies sits atop the org chart, making crucial decisions that alter the course of a business. When it comes to Mayweather Promotions, Leonard Ellerbe leads knowing full well his say isn’t the final one. If Mayweather dislikes a decision he holds the trump card. When there is a major fork in the road, it’s the champ that steers the company left or right. But that doesn’t make Ellerbe’s work any less important. The man behind the man has the trust and support of Mayweather, the man that writes the company’s checks. You don’t need all-consuming power to be powerful as Ellerbe has so aptly proven.

As a successful servant-leader you need to show people like Mayweather that you’re smart, thorough and place the success of the business above your own ego. Become a decision maker by showing those in power that you can present options as well as recommend the right course of action. A knack for persuasion makes your voice heard and extenuates the positives in your great ideas. Only then will those in power respect you and put their faith in your guidance. Ellerbe has taken a prominent seat next to his boss by keeping Mayweather in the spotlight while building up a stable of athletes across weight classes—from Lightweight and Welterweight to Super Middleweight and Cruiserweight. Become a community builder to show business leaders that, while monetary success is important, it’s not all you strive to do. Mayweather Promotions, in concert The Floyd Mayweather Jr. Foundation, has uplifted the Las Vegas area with community outreach and financial contributions. Your empathy and ability to contribute to the greater good won’t be lost to onlookers within the organization. Foresight and a dreamer’s mentality will cement your leadership status. What separates a ‘doer’ from a ‘leader’? Forward thinking vision. Understanding what your company does well is important but determining its next move will keep your career ahead of the curve. Mayweather Promotions is doing just fine with an undefeated champion under its umbrella. But what’s to become of the fledgling promotions company when Money Mayweather hangs up his gloves? Its CEO knows success will rival Golden Boy Promotions or Don King Productions only if it prepares for life after Mayweather now. So—as you will do—Leonard Ellerbe builds for the future bringing in young talent that he’ll push to be the next Floyd Mayweather, the next king of the ring.

Servant-leadership doesn’t come naturally for us all. But it can be learned with enough effort, heart and patience. Business owners are willing to cede control to those that uplift a company and its employees above all else. Once you become that person the platitudes and power will flow your way. Floyd Mayweather is calculated in the ring with measured strikes and a patient two-step. His business partner, Leonard Ellerbe, reacts similarly in the boardroom when it’s time to make a deal. Follow Ellerbe’s lead—speak well of those that deserve it and flourish in the shadows. You’ll feel like a champion even if the guy by your side is holding the belt.