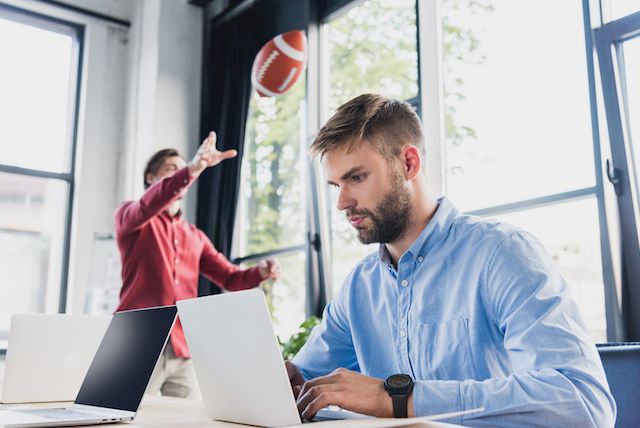 I don’t have an agent. You don’t have an agent. Your parents, siblings and friends don’t have agents. Yet seemingly everyone you read about in the sports industry has one. And it’s not just athletes, right? Executives in the team front offices, coaches, sportscasters, writers and many others pay someone else good money to handle contracts, negotiate endorsement deals, assist with financial planning and control bad publicity.

An agent in sports serves many purposes but strives to achieve one primary goal: maximize a client’s earning potential. And that’s done by championing the people you represent at every opportunity. It’s a career that’s tough to crack but it pays off big once you’ve made it. Yet many wonder if agents are needed in sports. How did they proliferate the sports industry and why have they stuck around?

The entertainment industry—film, television, radio, music, sports, theater—demands certainty. Because entertainers create content that’s not easily reproducible, both the entertainer, and their employer, need clear boundaries. Who owns the songs when we part ways? Will I get royalty checks when my sitcom airs in syndication? In sports, the uncertainty often revolves around an athlete’s health and how both sides are protected if injury strikes. And, for coaches and front office executives, it’s about ensuring some continuity for the organization. Professional sports contracts cover broad stroke agreements, important details as well as the minutiae. But it’s the importance of certainty—on both sides of the table—that gives purpose to contracts.

It feels like power agents, the likes of Scott Boras, Arn Tellem, and Drew Rosenhaus, have been around since the early days of professional sports. But, until the 1960s when attorney Mark McCormack worked with a young Arnold Palmer, agent representation in sports was practically unheard of. McCormack went on to arrange exhibition tennis matches between Bjorn Borg and Jimmy Connors, promote Pele soccer matches and pair Palmer with company executives for rounds of golf. McCormack worked all angles to make his clients household names. His efforts proved to athletes that an agent, a trusted representative, would bring them more fame and money. It added another power player, and a fresh dynamic, to the business side of sports.

When you consider a 15% tip on a $30 bill at your neighborhood Chili’s it’s only $4.50. But when you pay a 5% agent’s fee on a $30 million contract it equates to an exorbitant $1.5 million. So why do athletes, coaches and media celebrities pay 5% or 10% of their salary to an agent? So they can do what they love while letting someone else maximize their paycheck. Agents deal with contracts for two primary reasons:

1) agents are professional negotiators, and

In simple terms, a contract represents a meeting of the minds, an employment agreement outlining expectations for both parties. But negotiating and contracting is anything but simple.

Negotiating is an art form; it’s not for the faint of heart and it’s not for the overly emotional. Agents study the art of negotiation the way ballplayers workout and coaches study game film. Closing a deal is their walk off home run. While a player can certainly represent himself—former NFL quarterback Daunte Culpepper did—it complicates the negotiation process. The back-and-forth gets impassioned; agents argue that their client is worth top dollar and organizations contend the player isn’t quite elite. To make progress, to get the deal done, it means accepting that things said at the table can be forgiven once the ink on the paper dries. That’s easier to do when the man or woman stepping on the field doesn’t hear the negotiating table negativity.

An agent will get the most out of each deal because they’re practiced, having handled multiple deals per year. Coaches or athletes that negotiate their own contracts have much less experience to draw from. Allowing an agent to represent a client’s best interest leads to more favorable terms and an industry-standard agreement. Players don’t coach because they’re better at playing, and coaches don’t play because they’re better teachers than athletes. Likewise, players and coaches are served best by staying out of the boardroom when negotiations are most heated.

Personal services contracts—deals that follow the skills of a person—are used in professional sports because athletes have unique talents and abilities. An agent with a background in law will best handle the intricacies and high stakes of a professional sports contract. An express contract requires six elements to be both binding and enforceable:

While a self-represented athlete can rely on the other party (the team) to define the terms, it’s not in their best interest. Agents will carefully craft the language and redline the document until it’s perfect. They catch loopholes and press for clarity on every page. They outline achievable performance goals, inspect ironclad no trade clauses and accurately define dollars and years. The best agents are tenacious, constantly hunting for the next big deal, fervently protecting the rights of their clients and making athletes, coaches and sports media members some of the highest paid people in the world.