In 2018, the topic of women in sports became more commonplace and conversational among sports enthusiasts. Female athletes and professionals are getting the recognition they deserve.

Barriers were broken in the 20s and 30s with pioneer athletes like Gertrude Ederle (swimming), Babe Didrikson Zaharias (golf), and Jackie Mitchell (baseball). Decades later, the world of sports has been challenged and pierced by female athletes and influential women. Today’s sports are sprinkled with brilliant athletes who enjoy the title “the first woman” in many areas.

The list of firsts will continue to grow as more women achieve statuses that have historically been dominated by men. There are many remarkable women in sports, but let’s learn about eight of 2018’s most influential. The future is a bright and exciting one for female athletes, and the world is waiting with anticipation.

2018’s Most Powerful Women in Sports

Buss leads and influences in the NBA amid much controversy from her family after firing her own brother from the Lakers’ leadership. As controlling owner, Buss is not only protective of her father’s legacy but that of the Lakers’ as well, determined to lead the Lakers to continued success.

In 1987, Doris Burke became the Co-Female Athlete of the Year while playing for Providence College basketball as the second-most all-time leader in assists. She smoothly transitioned to a Radio Sports Broadcaster in 1990 for her alma mater and later held broadcaster roles for both female and male sports in the Big East.

In 2012, Shannon Eastin became the first female to officiate an NFL game between the San Diego Chargers and Green Bay Packers. As a child, Eastin was a national Judo champion, and in high school, she began officiating football games. She continued officiating in college and then in the Mid-Eastern Athletic Conference (MEAC), becoming the first female crew chief.

Eastin owns a sports officiating company that trains officials in basketball and football, and she remains active in Judo. Although she was accepted and welcomed by many NFL fans and professionals, she was also met with resistance by sportswriters like Darin Gantt of Profootballtalk.com and Sam Farmer of the Los Angeles Times, who complained Eastin became a referee while being a “strikebreaker.” Despite the adversity, Eastin has become an influential woman in sports, making history and serving as a role model for other women who want to follow in her footsteps.

In 2014, Becky Hammon became the first full-time woman to coach for an NBA team (as an assistant coach for the San Antonio Spurs). Her influential basketball career started slowly as coaches considered her too slow and small, but she did impress Colorado State University, where she became a three-time All-American basketball star.

Even though she was overlooked in the 1999 WNBA draft, Hammon eventually joined the New York Liberty, where she worked hard and mesmerized people with her shooting and hustle. She helped the Liberty reach the WNBA finals and earned her first All-Star selection in 2003. In May 2018, the Detroit Pistons considered Hammon to become their next head coach, which would make her the first female head coach in NBA history if hired. Pistons players have already voiced their support for her.

Jessica Mendoza is the first female Major League Baseball game analyst for ESPN. She reached the position in 2015 after much effort and a stellar career while playing for the Stanford University softball team, as well as the U.S. softball team. She later became a softball broadcaster in 2007 during the Women’s College World Series while also serving as a sideline reporter for ESPNU.

Mendoza is currently serving as a seasoned caster in her third season on ESPN’s Sunday Night Baseball and continues to be an influential analyst for the Women’s College World Series.

She is the first woman to win an Indy Car race and the first woman to win the pole position for a Nascar Sprint Cup race (2004). She also finished eighth in 2013’s Daytona 500, which is the best finish by a female in Nascar history. Truly an influencer, Patrick is a spokesperson for Life Happens and has appeared in commercials for GoDaddy, Aspen Dental, Nationwide Insurance, and Peak.

Michele Roberts is the first female Executive Director of the National Basketball Players Association and is considered one of the top female influencers and powerhouses in U.S. Sports. After graduating from U.S. Berkley Law School and later becoming a trial lawyer, she was chosen with 32 out of 36 possible votes as the first Executive Director for National Basketball Players Association.

The association represents more than 300 basketball players and manages more than $3 billion in salary budget. Roberts is also listed as one of the 25 Most Powerful Women in Sports, 2018, by Forbes magazine. 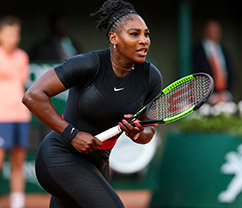 As another strong and well-known name in sports, Serena Williams has been a tennis star since she was three years old. She and her sister, Venus, were encouraged by their father and began playing in tennis tournaments in 1997. Since then, Williams has won 23 Grand Slams, starting in 1999 with the U.S. Open, and has won several doubles titles and gold Olympic medals.

She has enjoyed a stellar career and is currently ranked as the 22nd-best player in the world by the Women’s Tennis Association (WTA). As many influential athletes do, she has experienced several defeats and setbacks but continues to delight her fans with aggressive yet balanced play.

Ready to become an influencer in the sports world?

From Sports Management to Sports Internships, Jobs in Sports offers the most up-to-date sports job listings available. Gain access today and start becoming an influencer in the sports industry.