When it comes to finding jobs in sports marketing, you need to understand how to stand out. Writing a strong resume and expanding your network are great ways to start.

Also, focus on expanding your knowledge and expertise in marketing. No matter where you are in your career, finding opportunities in this niche is a difficult task. Once you find jobs in sports marketing you’re interested in, there’s more to the process of landing a job than just applying.

Dive deep into a speciality within the world of sports marketing. One of the most important aspects of marketing is branding.

If you want jobs in sports marketing, you need to understand the role branding plays. Despite what most people think, branding is much more than just logos and catchphrases. Essentially, a company’s brand is a promise to their customers.

A strong brand accomplishes a lot. It delivers a message, confirms credibility, connects target audiences with products, motivates the buyers, and creates customer loyalty. It’s important that you learn from the best.

Let’s take a look at the leading examples of sports branding strategies:

Whenever you see the swoosh, you can recall a great deal of information about this iconic brand. Nike, which was founded in 1964, continues to dominate the sports world by offering some of the highest quality athletic gear and footwear.

In the late 1980s, they ran a successful campaign around a slogan that became one of the core components of the brand — ‘Just Do It.’ The line is actionable and can be personalized, which helps most people relate to it.

Nike continues to resonate with people because they sell more than just shoes and apparel — they sell a lifestyle. Their mission statement highlights how everyone who has a body is an athlete and the company aims to inspire and innovate for every athlete in the world.

This big message helps build communities. Athletes and fitness enthusiasts unite behind the brand’s personality, which tends to be gritty and real.

They also target niche audiences effectively through various campaigns. In celebration of International Women’s Day earlier this year, they launched local-market ad placements throughout the world, under the tagline ‘Believe In More.’ Overall, they depict women as strong and confident, which helps combat a lot of gender stereotypes.

Nike never loses focus of its branding strengths. They continue to inspire and showcase how empowerment for all is a must. This can be achieved through sports and community.

Everyone recognizes the UA on an athlete’s chest. How did Under Armour become a household name within 20 years since its founding?

They started with a simple mission — to make a t-shirt that provided compression, wicked sweat, and helped regulate your temperature. They became the originator of performance apparel, and they continue to grow for a simple reason — their products are made to solve problems.

Purpose-driven brands can reinvent industries, and Under Armour is no exception. They continue to connect with athletes thanks for their slogan, ‘I Will.’

Similar to Nike’s ‘Just Do It,’ this slogan allows their audience to personalize this message. It can be motivational — what will you accomplish?

Their 2016 Olympic ad is among some of the most impactful advertisements in recent memory. It was part of their ‘Rule Yourself’ campaign, and it ended up winning a top prize at the 2016 Cannes Lions International Festival of Creativity.

The video depicts Michael Phelps going through his intense training regimen. He swims in the dark, lifts weights, eats hearty meals, sleeps, and dives into pools again and again. The entire film is artfully produced.

It’s effective because it shows Phelps training and preparing for what he’s best known for. It shows the actual effort that leads to what everyone sees — his performance at the Olympics.
Most of the film is in darkness, which aligns with the brand’s messaging – ‘It’s what you do in the dark that puts you in the light.’ This sentiment is not only memorable — it’s true and relatable for many athletes.

No matter what field you’re interested in, whether you want jobs in sports marketing or coaching or sales, you know the story behind Gatorade. The brand’s narrative brings a lot of value.

As the company states, the product was born in the lab. This refers to how a group of doctors invented the drink in a science lab on University of Florida’s campus in 1965.

Their invention was actually proven when the Florida Gators football team started drinking the sports beverage and finally began winning. They eventually won their first Orange Bowl in 1967.

Gatorade’s influence in the world of sports continued as NFL teams started keeping the drink in coolers on the sidelines. The tradition of dumping the beverage on coaches and athletes after a big win, known as the Gatorade shower, reinforces the brand’s recognition.

Combining recognition and credibility, which was birthed from the origin story, Gatorade continues to be the go-to sports drink for many.

By understanding specific aspects of marketing like branding, you’re more prepared to start and manage a career in sports marketing. Seek out learning opportunities so you are better equipped to build a career you love.

Ready to start your career? Sign up for a premium membership today! 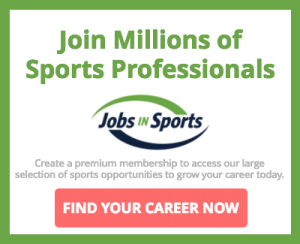