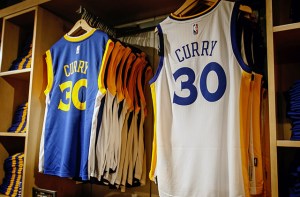 The younger generation or those that aren’t NBA historians may not know that the present-day Golden State Warriors initially played in Philadelphia from 1946-1962, then in San Francisco from 1962-1971. One of the earliest stars and arguably the best big man the NBA has ever seen was Wilt Chamberlain, who donned the Warriors uniform from 1958-1965. However, most of the seasons in franchise history have been substandard, which is what makes this dominant era that much more rewarding for Warriors fans around the world.

Of the seven Western Conference Championships over the past 54 years, four have come in the last four years under coach Steve Kerr and the Golden State Warriors. So, what has made this era of Warriors basketball the best in franchise history? And even among the best of all time? It’s a combination of incredible talent, focus, dedication, teamwork, and outstanding leadership and coaching.

But first, let’s look back at how far this franchise has come. Starting off strong, Golden State reached the playoffs 21 times in their first 30 years, winning three NBA titles. After nine consecutive seasons missing the postseason, the Warriors made a bit of a comeback, making the playoffs five times over the next eight seasons under All-Stars Chris Mullin, Tim Hardaway, and Latrell Sprewell.

7 Sports Values We Can Learn from Golden State

Mark Jackson led the Warriors to the postseason in 2013, losing in the semifinals. Although failing to reach the NBA finals, the team was clearly heading in the right direction. The likes of Steph Curry, David Lee, Klay Thompson, and role players Jarrett Jack and Carl Landry made their own impacts.

Learn from your failures, fix the problem, and make lemonade when life hands you lemons.

The following year, Steve Kerr, former long-time NBA guard and five-time NBA Champion, took over as head coach. Clearly knowing what it takes to win from his playing days (including playing alongside Michael Jordan, arguably the greatest to ever play the game), Kerr was the right man to lead Golden State to the top in 2014-2015. Andre Iguodala, Draymond Green, and Harrison Barnes started to emerge.

Recruit the right candidates for your team and develop relationships to build camaraderie.

Winning 67 games, the Warriors steamrolled through the league like a well-oiled machine. Curry and Thompson were great, as expected, but the development of both Green and Barnes as third and fourth top scorers on the roster was paramount to the team’s success.

The 2015-2016 squad was resilient and dominant, winning 73 games without head coach Steve Kerr for the first 43 games. Not missing a beat, Luke Walton stepped in as interim head coach until Kerr’s return to lead the team to a 39-4 start. Curry was once again unstoppable, averaging 30 points per game, while Thompson added 20, and Green began to flourish, leading the team in rebounding and 14 points per game. Even though they lost in the NBA Finals to the Cavaliers, everyone knew the Warriors would be back.

Adding Kevin Durant for the 2016-2017 season, the most coveted free agent on the market during the offseason, the Warriors looked to be even better than their record-breaking season the previous year. The three-headed monster of Curry, Thompson, and Durant combined for a ridiculous 75 points per game. Green, Iguodala, and others played their roles brilliantly en route to another dominant season and revenge over the Cavaliers in the NBA Finals.

As impressive as Golden State’s run has been, winning the championship in 2017-2018 may go down as the most impressive. Winning fewer than 60 games for the first time in Kerr’s tenure, this season is also the first time the team has failed to enter the playoffs as the top seed in the Western Conference.

While someone might look good on paper, you need to determine if their skill sets are the right fit. Does their personality mesh well?

The Warriors overcame significant injuries up and down the roster. Curry missed nearly 40% of the regular season, while Durant, Iguodala, and Green missed a combined 40 games. In fact, only reserve Nick Young, who averaged 7.3 points in 17 minutes per night, played in at least 80 games.

We all face varying degrees of change. If you can accept that change is not necessarily a bad thing, you can still move forward.
Just recently winning their third NBA title in four seasons, what other lessons can we learn from the Golden State Warriors?

Besides the obvious of having top talent, the Warriors have been resilient. When Curry went down, Thompson took over. When starters went down, role players stepped up. The team still won 58 games, was a respectable 17-14 in Curry’s absence, and finished as the second seed in the Western Conference.

While all things may appear to go well when a team wins 80% of their games, this season’s Warriors show how to overcome adversity.

Commitment to winning is key, and leadership and confidence have driven the team.

An appropriate gauge of teamwork offensively in assists per game (APG). Golden State led the league at 29.3, a full 2.2 assists per game ahead of the Philadelphia 76ers, the next-best APG team.

While many see the Warriors as a run-and-gun team, they’ve also been great on the defensive end, which requires excellent communication and teamwork. They finished third in the NBA in point differential (+6.0) and middle of the pack for points allowed.

The total makeup, from the owner to the coaches, trainers, and stars, to the last man on the depth chart, is one to model for success.

Commitment has also been a key to Golden State’s success. After all, the team has played through June each of the past four seasons. NBA teams may not admit to it, but every team prepares to play their best to try to knock the Warriors off their pedestal.

Despite the bullseye on their back, the Warriors have overcome hostile road crowds and extra hard play by opponents to get to the NBA Finals consistently.

Athletes and sports professionals alike can learn from this era of Golden State basketball. Teamwork is key. No matter how many stars a team has, every player on the roster has a role to play. Like a complex machine, with even one minor part not functioning properly, it won’t be as efficient.

Ready to be a part of a team? Sign up for a membership to Jobs in Sports and search for the most up-to-date sports job board available. From sports management internships to NHL jobs, we have just what you’re looking for – so start applying today!